We took a look at the plugin repository and discovered the following:

During our analysis, we found 18 abandoned plugins that are currently available for installation from the WordPress plugin repository that appear to have vulnerabilities that have not been fixed. In each case the plugin has not been updated for 2 years or more. Some of them have thousands of active installs.

We also found 4 plugins (marked with asterisks in the table below) that have fixed a vulnerability, but their fix was released in such a way that existing users are not updated to the newest fixed version. In each case, the author committed a fix to trunk but did not increment the version number and tag it properly in the plugin repository, so their users remain vulnerable.

The following table lists the plugins that we found, along with number of active installs and the details about each vulnerability. Several plugins are listed multiple times because they have had multiple vulnerabilities reported.

What to do if you use one of the plugins above

If the plugin is not marked with an asterisk, we suggest you disable the plugin and remove it from your system. Then immediately contact the plugin author and ask for clarification on whether the plugin has a vulnerability or not. You can direct the author to this blog post which includes suggested actions for plugin authors below. You should start with the plugin support forum on wordpress.org for a particular plugin.

If the plugin is marked with an asterisk, you can disable and remove the plugin. Then reinstall it and you should have a newer version. We have not audited individual plugins for security so we can not verify whether a vulnerability has been comprehensively fixed.

If you are the author of one of these plugins and have not fixed one of the reported vulnerabilities, we recommend you do so immediately and release a fix to your customers. Then follow the steps in the bullet list below.

If your plugin is marked with an asterisk, we suggest you read the section on the WordPress codex on updating your plugin. Create a new version for your plugin so that existing users will be updated to the fixed version, tag the release and follow the additional steps we suggest below.

If you have fixed a vulnerability in your plugin and we included it above, then you did not mention it in your changelog and it has not been recorded on the wpvulndb website, the source of our data above.

We suggest you take the following actions:

If you are a WordPress site owner, it is important that you evaluate each plugin carefully before you install it. Check how long it has been since the last update. If it has been more than 2 years, you should think twice before installing the plugin because it is no longer actively maintained. You may consider reaching out to the author or posting on the support forum to find out more information.

The plugin repository is one of WordPress’s greatest assets because it provides a huge amount of code and a large number of applications that extend WordPress. It is also completely open and anyone can contribute. There is no formal source code auditing process or security analysis done on a plugin when it is submitted. There is also no ongoing auditing process for each subsequent release.

A large number of plugin updates are submitted to the WordPress repository every day. For this reason it is important that you gain at least a basic understanding of who is behind a particular plugin before you install it. Here are a few steps you can take to evaluate whether you should use a plugin:

You can find all this information when you add the plugin in WordPress. Simply click on the plugin title and you’ll find the following. We have highlighted the section you should pay attention to below: 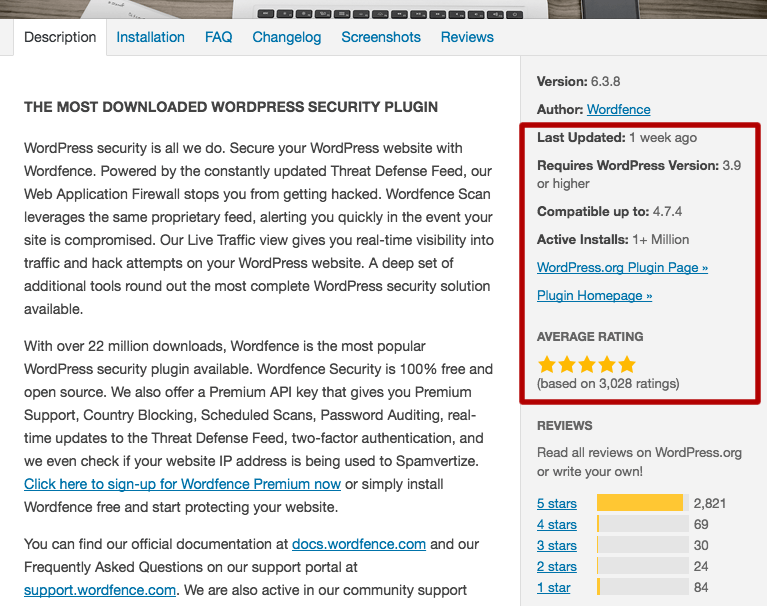 Plugins can make adding functionality to your website incredibly easy and are a big part of why WordPress is such a popular platform. The plugin repository on WordPress.org is an incredible resource, but as we have shown above it contains both abandoned plugins and ones with known vulnerabilities. Every plugin you add to your site increases your security risk, and you should evaluate each one to make sure it is being properly maintained.

As always we welcome your comments below. Special thanks to our security researcher Pan Vagenas who compiled the research we included in this post.