After its removal from the WordPress plugin repository yesterday, the popular plugin WP GDPR Compliance released version 1.4.3, an update which patched multiple critical vulnerabilities. At the time of this writing, the plugin has been reinstated in the WordPress repository and has over 100,000 active installs. The reported vulnerabilities allow unauthenticated attackers to achieve privilege escalation, allowing them to further infect vulnerable sites. Any sites making use of this plugin should make it an immediate priority to update to the latest version, or deactivate and remove it if updates are not possible.

This post is Copyright 2018 Defiant, Inc. and was published on the wordfence.com official blog. Republication of this post without permission is prohibited. You can find this post at: https://www.wordfence.com/blog/2018/11/privilege-escalation-flaw-in-wp-gdpr-compliance-plugin-exploited-in-the-wild/

In typical use, the plugin handles a few types of actions which can be submitted via WordPress’s admin-ajax.php functionality. These actions include making the sort of data access requests and deletion requests required by GDPR, but also includes functionality for changing the plugin’s settings from within the WordPress admin dashboard.

However, unpatched versions of WP GDPR Compliance (up to and including version 1.4.2) fail to do capability checks when executing its internal action save_setting to make such configuration changes. If a malicious user submits arbitrary options and values to this endpoint, the input fields will be stored in the options table of the affected site’s database. 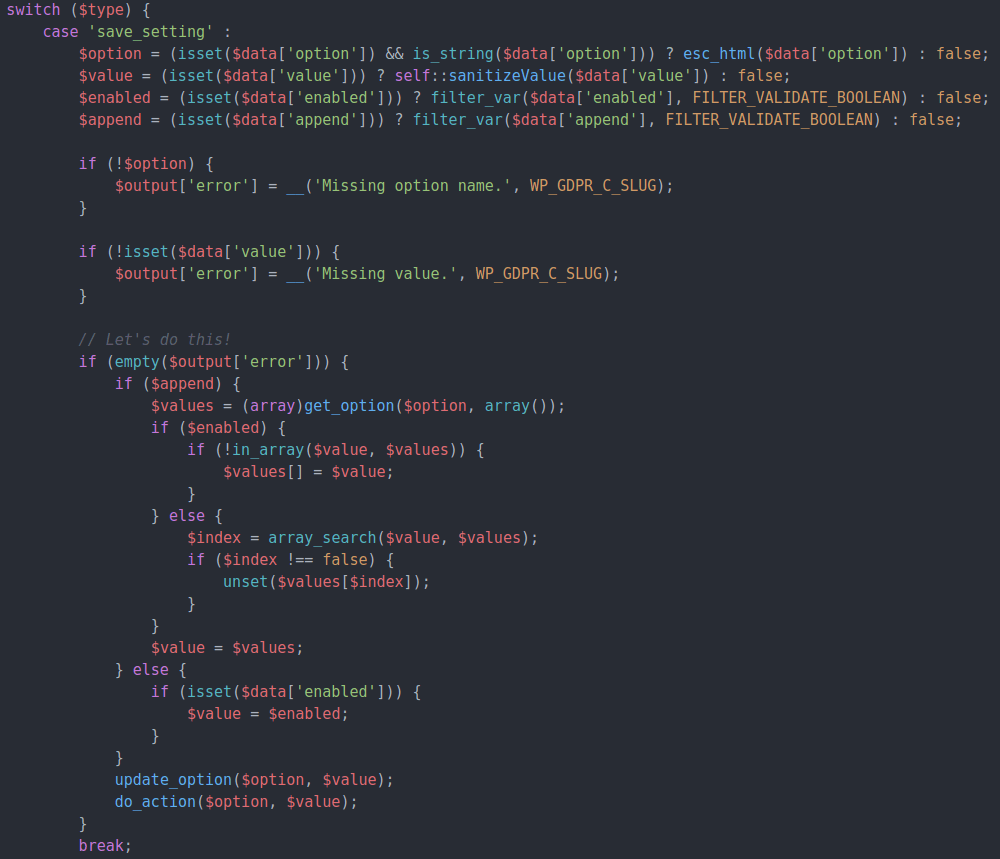 In addition to the storage of arbitrary options values, the plugin performs a do_action() call using the provided option name and value, which can be used by attackers to trigger arbitrary WordPress actions.

Disclosures of this flaw have been reporting it as two distinct vulnerabilities: first the arbitrary options update and second the arbitrary action calls, but with both potential exploits living in the same block of code and executed with the same payload, we’re treating this as a single privilege escalation vulnerability.

Exploits In The Wild

We’ve already begun seeing cases of live sites infected through this attack vector. In these cases, the ability to update arbitrary options values is being used to install new administrator accounts onto the impacted sites.

By leveraging this flaw to set the users_can_register option to 1, and changing the default_role of new users to “administrator”, attackers can simply fill out the form at /wp-login.php?action=register and immediately access a privileged account. From this point, they can change these options back to normal and install a malicious plugin or theme containing a web shell or other malware to further infect the victim site.

In several of the cases we’ve triaged since the disclosure of this vulnerability, we’ve seen malicious administrator accounts present with the variations of the username t2trollherten. This intrusion vector has also been associated with uploaded webshells named wp-cache.php. While these are common IOCs (Indicators of Compromise), these exploits are of course subject to change as attacks grow in sophistication.

Until the patch was released yesterday, more then a hundred thousand WordPress sites using the WP GDPR Compliance plugin were vulnerable to this type of attack. It is of critical importance that any site using this plugin performs the update as soon as possible.

At this time, the Wordfence Threat Intelligence team has released a new firewall rule preventing exploitation of this flaw for all premium users. Users of the free version of Wordfence will receive the new rule following a thirty-day delay, but as always they can protect themselves by updating their site’s plugins.

If you believe your site has been impacted by this vulnerability, please do not hesitate to reach out to our site cleaning team to begin the remediation process. Also, please consider sharing this post with your peers to improve awareness of this issue.