Updated 3:19PM Pacific Time: A method to ‘vaccinate’ yourself against this ransomware variant has been found. I have posted details towards the end of the post along with a batch file you can run. It is as simple as creating the file C:Windowsperfc and marking it read-only.

Update 2 at 7pm PST on Tuesday: It appears that the initial infection many have come from a company called MeDoc that was breached. Their systems were infected and they then pushed out an update, spreading the infection. MeDoc are disputing the allegation. Sources: Talos quoted on ZDNet, Forbes and FireEye.

This is a public service announcement from Wordfence due to the widespread and severe nature of this attack. A major ransomware attack targeting Microsoft Windows systems is affecting companies and systems, many of them critical, on a global scale.

A new ransomware variant is spreading quickly across the globe at the time of this writing. There is no consensus yet in the security research community, so the following information is provisional in nature:

The ransomware has been dubbed “Petya.” It likely spreads by using two separate exploits. You don’t need to click on anything or take any action. This can spread into your system through the network. That is why it is having such a wide impact and why it is important that you update your system to protect yourself.

The ransomware has affected a large number of companies, organizations and government entities on an international scale. The following is a screenshot of the ransomware page you are confronted with once your files are encrypted: 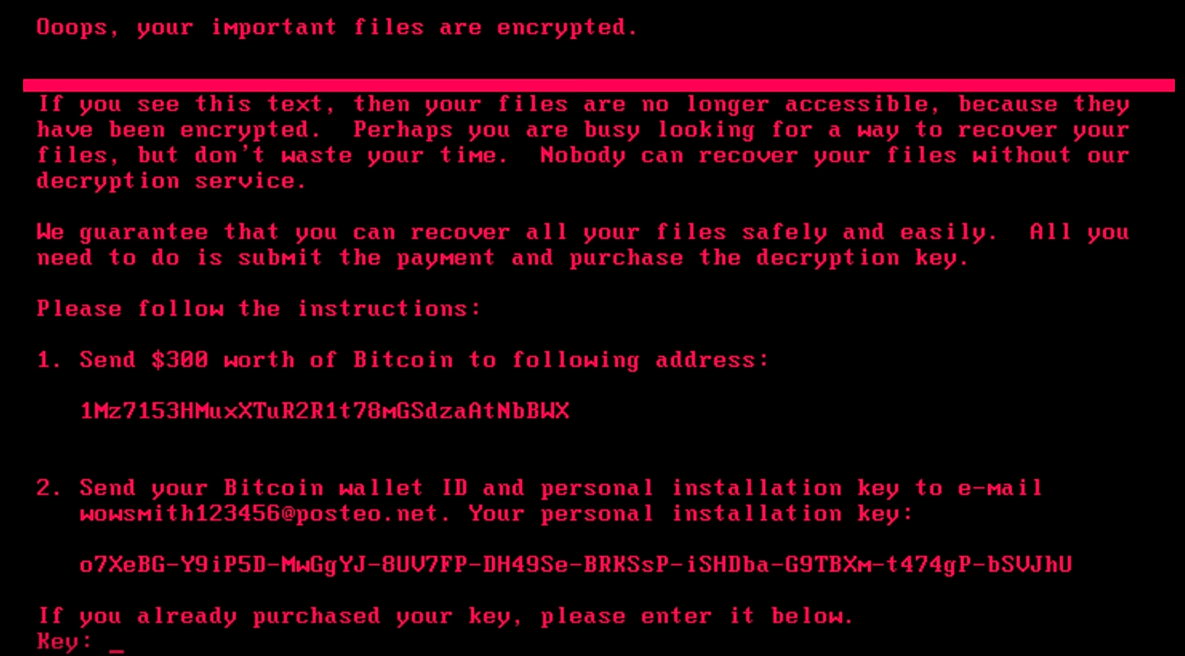 Colin Hardy has provided a behavioral analysis of Petya, which includes a video demonstration of the malware in action:

If you have not done so already, you should immediately install the MS17-010 patch from Microsoft.

If you currently run an unpatched Windows system, you may not have time to patch it before you are infected. Consider shutting down your machine, if feasible, and leaving it off the network until there is consensus in the research community on what this exploits and how to protect against it.

If you are technically able to, we recommend you block network access to port 445 on your Windows workstations. You may also want to monitor traffic to that port if you are a security professional.

Keep an eye on the Microsoft Security Response Center where they will hopefully release formal guidance soon.

Update your anti-virus definitions and run a scan on your system. You can find out which anti-virus products are detecting the current variant of Petya on this VirusTotal page. I’ve linked to one of the files involved in the infection. The page shows which AV vendors are currently detecting this file. The green check marks mean the file is not detected by that AV vendor (it’s counterintuitive).

Who This Has Affected So Far

The list is long and growing; the above just a snapshot.

Many are reporting the belief that the South Korean hosting company that paid attackers a $1M ransom a week ago to recover their data have created a huge incentive for future ransomware attacks.

That has resulted in this new spate of attacks affecting systems globally.

Coverage of This Story

Update 3:19pm PST: A Vaccine has been Found

In the past couple of hours researchers have found a ‘vaccine’ against having your files encrypted by this new variant of Petya. They discovered that if a file exists, the encryption routine will not run.

Amit Serper who found this had their findings confirmed by other security researchers.

To vaccinate a machine against this ransomware, simply create a file called perfc in the C:Windows folder and mark it read only. The following batch file courtesy of BleepingComputer will do the job for you:

This post in BleepingComputer also includes instructions on how to create the file manually if you would prefer to do that. Once this file is created, the encryption routine for this specific ransomware variant will not run and encrypt your files.

We recommend you let your friends and family know about this fast spreading campaign as a matter or urgency to help them stay safe.