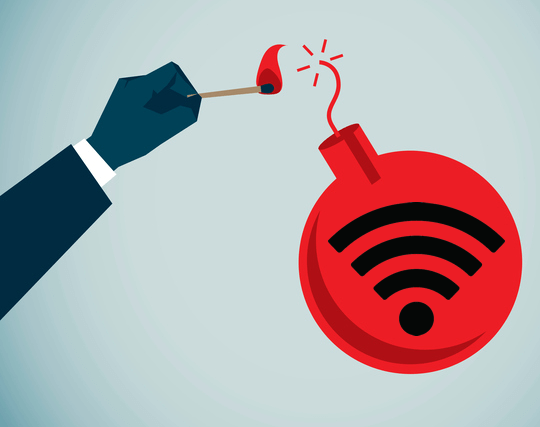 This is a public service announcement (PSA) from the Wordfence team regarding a security issue that has a wide impact.

Today is being called “Black Monday” in many information security circles. We have had a major Wi-Fi vulnerability announced that affects absolutely every device that supports Wi-Fi. The vulnerability allows attackers to decrypt WPA2 connections. A second vulnerability also emerged today, and we will cover that at the end of this post.

The Wi-Fi vulnerability is being called “KRACK”, which is short for Key Reinstallation Attacks.

I’m going to cover the problem in relatively non-technical terms in this post so that you are able to clearly understand how this affects you and what you can do about it, right now.

Once you are done reading this, I strongly recommend you spread the word, because this Wi-Fi weakness can allow attackers to crack WPA2 which was previously thought of as a secure Wi-Fi encryption protocol.

Researchers at KU Leuven, a university in Flanders in Belgium, have discovered a way for an attacker to read sensitive information that is sent over a Wi-Fi network using WPA2.

Attackers can use this to steal sensitive information like credit card numbers, passwords, chat messages, emails, photos and more. The attack works against all modern protected Wi-Fi networks.

It may also be possible for an attacker to inject malicious information into the Wi-Fi network. This could include ransomware and malware.

The vulnerability is in the Wi-Fi standard itself, and not in individual products or their implementations. That means that all products that correctly implement the WPA2 standard are affected.

If your device supports Wi-Fi, it is likely affected by this vulnerability.

Products that are known to be affected by this at this time include Android, Linux, Apple, Microsoft Windows, Linksys and more. The list of affected vendors is enormous, and vendors including Amazon, Cisco and Netgear are scrambling to release patches to fix this issue.

BleepingComputer has compiled a running list of vendors that will be growing over time as more information about patches becomes available.

You can find out the technical details on the KRACK attack from the researchers themselves at krackattacks.com. This includes an academic paper and demonstration video, shown below:

What to Do About the WPA2 Vulnerability

This affects every device you own that uses Wi-Fi. If your device uses public Wi-Fi, you are at higher risk. The vendors that make your products are working on patches which they will release in the coming days. As they release the patches, you will need to update your devices and hardware.

The good news is that this vulnerability does not require you to replace any hardware. It is fixable through a software update.

The devices and hardware you will need to update, once patches are released, include the following:

You should prioritize devices that use public Wi-Fi higher than your other devices. This puts mobile phones and tablets at the top of the list.

How to Stay on Top of Updates

Your desktop, mobile and tablet devices will prompt you when an important security update is available. Many may update automatically. Most devices also provide an option to manually check for updates. We recommend you do that periodically this week so that you catch any updates as soon as they are released.

For routers, printers and other “Internet of things” devices, you may have to sign into the device to manually update the device “firmware.” For routers, you can contact your Internet service provider for help if you are unsure how to update. You may need to consult the manual of other devices or do a Google search to learn if they are affected.

Another vulnerability known as “ROCA” was also announced today. This vulnerability involves an attack on public key encryption which may weaken the way we authenticate software when installing it. It affects many other systems that rely on public/private key encryption and signing. Fixing this also requires you to update your devices using vendor-released software updates, so keep an eye out for security updates for your devices and workstations that fix any ROCA-related issues.

The combination of KRACK and ROCA is why we are referring to today as “Black Monday.” These are both severe vulnerabilities, and they emerged on the same day.

It is imperative that we get the word out about these vulnerabilities so that our friends and colleagues can update their devices before they are exploited. Please spread the word.

The post PSA: Severe Vulnerability in All Wi-Fi Devices appeared first on Wordfence.