Surviving Electmageddon: Protecting against a wave of DNS outages

Two weeks ago, DNS provider Dyn was attacked in a very large DDoS attack. IoT devices were used to send an overwhelming amount of traffic to Dyn’s resolvers which resulted in Dyn effectively being taken offline for hours. This took out Netflix, Paypal, Github, Twitter and many other name brand services.

The Dyn attack may have been retribution against a researcher from Dyn who collaborated with Brian Krebs – both of whom have been working to expose DDoS-for-hire and DDoS protection rackets. We think this explanation is more likely than it being a ‘state sponsored attack’.

Earlier this year, Russian hackers, codenamed ‘Fancy bear’ and ‘Cozy bear’ hacked into the Democratic National Committee which resulted in email leaks. This may have been an attempt to disrupt or influence the US election.

The US election is on November 8th, less than 1 week from now. Some candidates may benefit if fear, uncertainty and doubt are cast on the election itself or the results. Launching a massive DDoS style attack on DNS providers on November 8th would achieve that objective. It would take many services off-line, including news, exit poll results, official candidate websites, official announcement sources and services we rely on like banking.

We think that certain nation states may have reason to create this kind of disruption. We also think that malicious individuals with their own agenda may also try to create disruptions on November 8th. The Dyn attack demonstrated that by leveraging IoT devices and the Mirai source code, massive outages can be created by individuals or state actors.

In light of the above facts and the climate we find ourselves in, we would like to make a recommendation to owners of mission critical websites to help them weather the storm that may arrive on November 8th. We are suggesting a change in DNS configuration that is technically complex and also increases operating costs. We recommend this change for business or mission critical websites who have a technical staff they can call on to help them implement this.

We recommend that websites set up a secondary DNS provider via a different DNS vendor. By doing this, if your first DNS vendor is attacked, the second one will answer any requests for your domains IP address and your website or service will continue functioning as per normal.

To do this, you need to have a primary DNS provider that allows “zone transfers”. That means that the primary provider must give you the ability to authorize another DNS provider to copy or replicate all your DNS records from time to time.

Wordfence is moving to this configuration over the next few days and we’re implementing it with our current DNS provider, DNSMadeEasy as primary and with Verizon’s Edgecast DNS service as the secondary. We have verified that they can work with this configuration and they will give us the performance our customers expect. 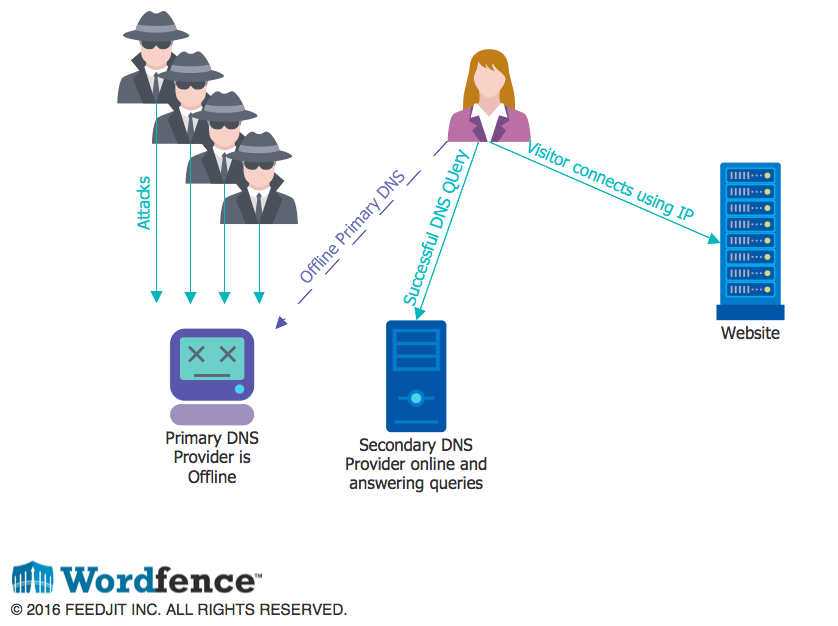 We did an audit of the top 10,000 websites (Source: Alexa), and out of 1832 domains that use Cloudflare, only 3 have secondary DNS configured on another vendor. We think these three are using something other than the standard zone transfer to secondary configuration because Cloudflare technically doesn’t support doing that.

Using a single DNS provider if you operate a mission critical website creates a single point of failure. As recent history has shown, this can leave you offline during a large DDoS attack. As the old Latin saying goes, if you wish for peace, prepare for war. We recommend mission critical websites make appropriate preparations in case we see a repeat of October 21st – and let’s all hope that November 8th comes and goes peacefully.

The post Surviving Electmageddon: Protecting against a wave of DNS outages appeared first on Wordfence.