One of the most effective ways the Wordfence team keeps the WordPress community and customers secure is through something we call the ‘Threat Defense Feed’. This is a combination of people, software, business processes and data. It’s an incredibly effective way to keep hackers out and provide our customers with early detection.

Today I’m going to go into some depth describing how the malware detection part of the Threat Defense Feed works. This will be a fun journey into some of the internals here at Wordfence, and will give you insight into how we constantly innovate to keep you and your customers secure.

Some time ago the team and I realized that to give our customers the best protection available, we needed to know what attacks are occurring on the ground. We needed a constant flow of ‘footprints’ that hackers left behind that we could turn into threat intelligence and feed into our products to improve detection.

We faced an important decision about where to get the forensic data we needed. We could either rely on hosting companies and open sources of malware samples, or we could go into the incident response business ourselves, getting what we needed from recently compromised sites while helping customers recover from a hack.

The decision was obvious. So we kicked off an ambitious project to create a constant flow of new threat intelligence. We immediately entered the site cleaning market and built a highly competent team of forensic experts that can perform incident response, analyze hacked sites and get those customers back up and running with a clean site as quickly and effectively as possible.

One of the products of our site cleaning activity is that our team finds malware samples and they feed that into a huge repository of malware that we have created. Our site cleaning customers are able to benefit from excellent customer service and an incredible forensic team at one of the lowest prices in the industry, because the malware we recover from their websites is used to help protect other Wordfence customers.

In addition, we occasionally receive huge troves of malware from customers and hosting companies. We also feed these sample sets and those from several other sources into our malware repository on a continual basis.

Then the malware sample is handed to our malware signature authors who are experts in creating highly optimized regular expressions that are used by our scan engine to detect malware. The sig authors perform another de-duplicating step to ensure that a recently added malware signature isn’t already detecting something they’re working on.

Once our sig authors are sure what they have is 100% unique malware that we haven’t seen before, they hand craft a new malware signature to detect it. Each signature is checked for compatibility with different versions of PHP and the PCRE regular expression library.

One of the worst things that a security product can do is to produce false positives. In malware detection, a false positive is a situation where the scanner tells you that it has discovered malware but it really hasn’t. It wastes your time and it also desensitizes you so that you don’t take notice when a true positive shows up. So we put a lot of time into making sure that our malware signatures don’t create false positives.

Once our sig authors have moved a batch of malware signatures into beta, they run their own set of tests on the batch of signatures. Our sig authors have WordPress installations set up with over 3000 of the most popular plugins and themes installed on each test machine. As part of the early beta test they do, they will enable the ‘beta’ flag in Wordfence so that it uses the beta signatures, and then run a scan on these test machines.

If the scan runs on a clean test machine and comes back with no false positives, they move the scan to the next phase which is a formal software quality assurance step. At this point a senior member of our quality assurance team performs a series of final tests to ensure that the batch of beta malware samples does not produce any false positives and that they detect the ‘true positives’ that each signature is designed to detect. 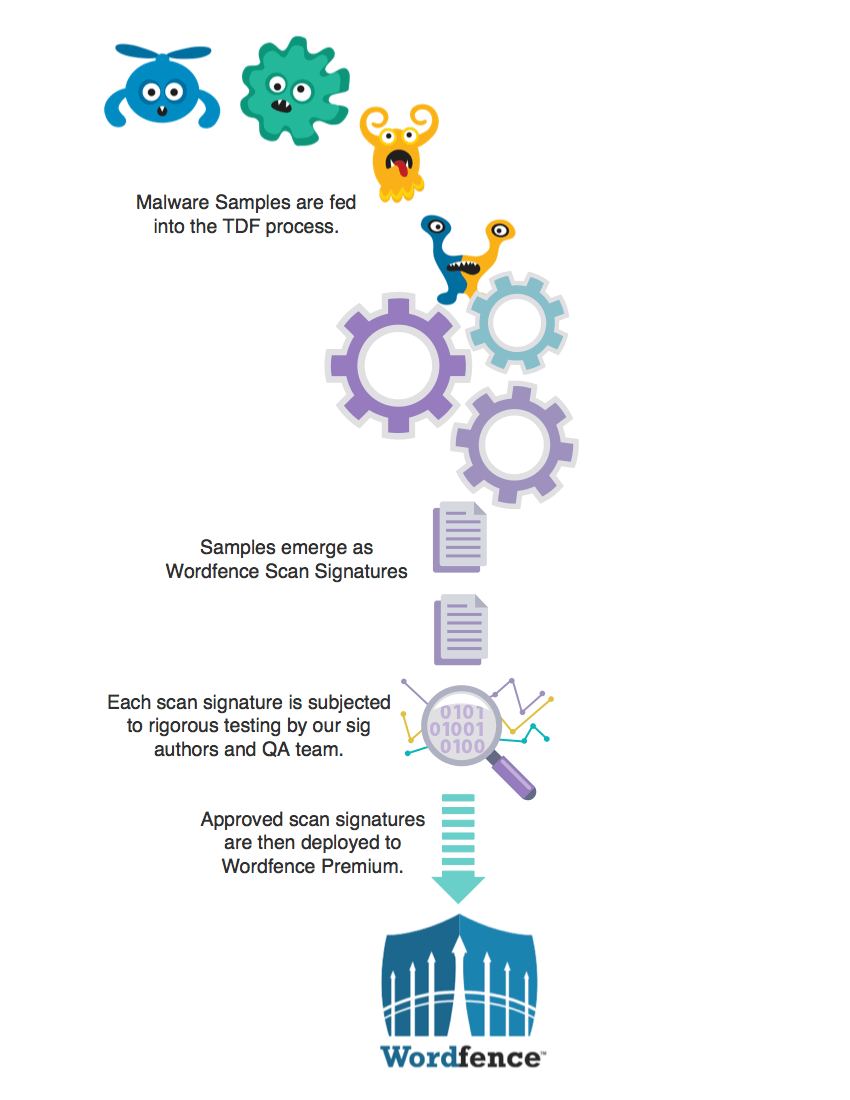 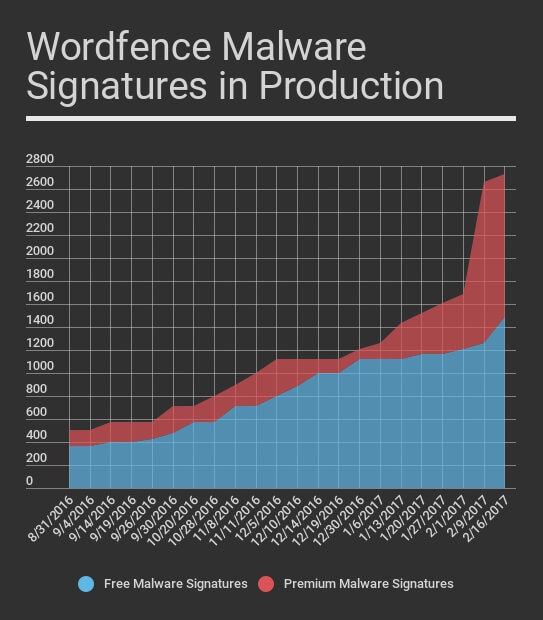 At Wordfence we are continuously working to find new ways to efficiently deliver actionable threat intelligence to our customers in real-time so that we can better secure you, your website and your customers. We have a research project underway at present that is working on finding new ways to further improve the process I’ve described above.

The most important component of our Threat Defense Feed (or TDF) is our people. The team at Wordfence has done an incredible job of taking ownership of the TDF and continuously improving it and the products, like the Wordfence plugin, that use the threat intelligence that the TDF provides. The result is that over the past year you have seen a significant improvement in detection rates both on the Wordfence Firewall and in the malware scanner.

Special thanks to Wordfence team member Åsa for designing the super awesome malware characters in the diagram above.